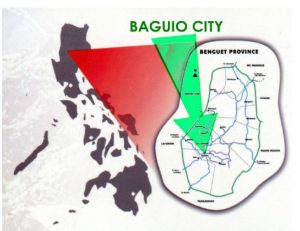 Baguio City is geographically located in the south central part of Benguet Province in the Cordillera Administrative Region (CAR). The developed portion of the city corresponds to a plateau that rises to an elevation of 1,400 meters. Total land area is57.49 square kilometers enclosed in a perimeter of 30.6 kilometers.

Approximately, the city is 250 kilometers north of Manila. 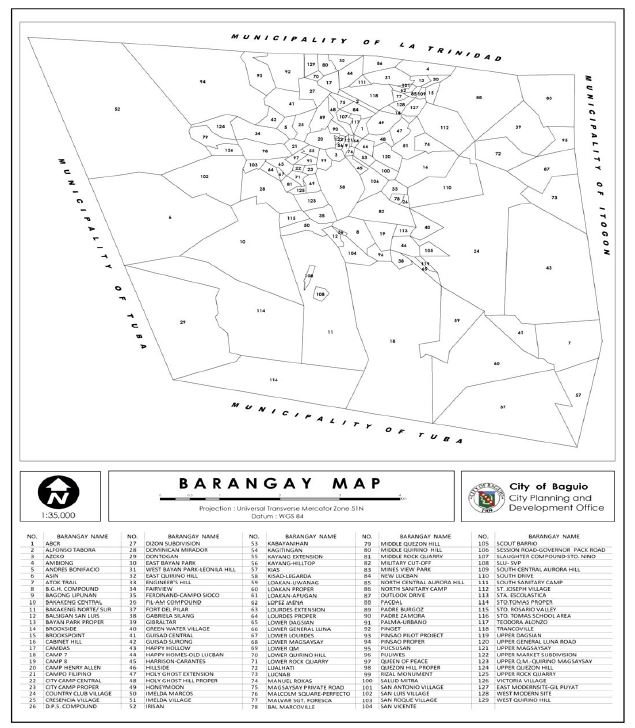 HISTORY
The vastness and promising economic potential of the place lured the Spaniards to conduct series of expeditions. Early explorers included Juan Salcedo in 1572 and Don Q.M. Quirante in 1664. Series of attempts were made to pacify the Igorots but failed. Finally in 1846, Commandante de Galvey established his Commandancia at La Trinidad, Benguet (named after his wife). Galvey went to establish the province of Benguet with 31 rancherias. The first Kapitan of Benguet was Pulito of Kafagway, now Baguio, a minor Rancheria of about 20 houses.

The Spaniard were able to establish order, built churches and schools, made trails and introduced coffee during their long occupation of the area.

1904
Baguio was a pasture awaiting development. It has been expected that the city quickly take form after Benguet roads was opened in 1905. Instead it took on a more measured pace before finally coming to full fruition by 1912. 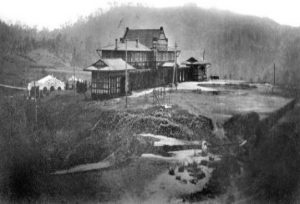 The Americans came early in 1900 and established their government with Mr. H. Phelps Whitmarsh as the appointed

Governor of Benguet and Baguio as the capital. This was the first provincial government to be established in the Philippines and this happened in a year prior to the inauguration of the civil government of the Philippines. Their best administrators and teachers were fervent boosters and promoters: Dean C. Worcester, Governor General Luke Wright, Cameron Forbes and others, who together with Filipinos committed to make the place haven.

The Burnham plan greatly altered the original mountain settlement and provided the first physical framework plan for the city. It paved the way for a very rapid physical development which integrates a road and park system into one. It envisioned evolving a compact garden city for 25,000 to 30,000 people. Supporting this development plan was the enactment of Act 1963 containing the charter authored by Gov. George A. Malcolm. It was approved on September 1,1909 and provided administrative as well as managerial autonomy for the city.

By the time the City received its charter in 1909, it was well on its way to becoming “The Summer Capital of the Philippines” in every sense of the word. It has a blueprint of its physical development, a summer residence of the governor general, a rest and recreation facility for the military, a school for boys, a school for constabulary men, a sanitarium, a summer camp for teachers, a country club, a meteorological observatory, churches and at least two hotels.

The mines near Baguio were developed and productive. Business in the city flourished with commercial centers put up. Recreation facilities were installed. The city was growing before the outbreak of the war. 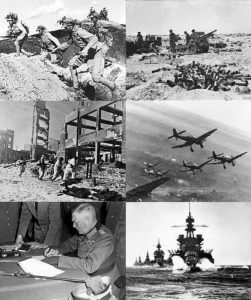 1939
History will tell us that the war in the Philippines began and ended at Camp John Hay. During the early part of the Second World War, Baguio was among the first places to be attacked by the Japanese Imperial Army.

Not long afterwards, on 27 December 1941, the Japanese columns arrived on Naguilian Road. Baguio was then declared an open city under the leadership of the Chief of Police Keith. The occupation of the city by the Japanese is affected without the firing of a single shot. The first Headquarters was set up at the Japanese school on Trinidad Road, then at the Baguio Hotel, and later at the Masonic Temple.
The Nippon forces immediately organized the military police administration and third degree chambers. They also converted Camp John Hay into their Garrison and a part of it was used as a concentration camp. Most of the people of Baguio took to the hills for survival. The guerrilla movement figured prominently at this time. While the Japanese atrocities were mounting, the people’s hatred was steadily reaching its breaking point.

In 1944, when the American Forces lead by Gen. Douglas Mac Arthur landed in Leyte, General Yamashita moved his headquarters to Baguio. The puppet Philippine Government under President Jose Laurel was also set up in the city. Finally on 08 January 1945, American and Filipino forces advanced toward Baguio to liberate it from the Japanese force. In the process, Baguio suffered intensive artillery shelling and aerial bombardment.

The City was destroyed as the liberating forces were flashing out General Yamashita and his army. Many of the residents of Baguio lost their homes and took shelter for about two (2) months at the Baguio Cathedral. Since there was an acute food shortage, Yamashita eventually allowed thousands of Baguio residents to leave the City. The American forces advanced toward the city from the south by way of Kennon Road and also from the North West through Naguilian Road. There was intense fighting along their way. When the Japanese defensive positions started to fall, General Yamashita quickly retreated north from Baguio. However, he left a small delaying force to cover his withdrawal from the city.

Not aware of the withdrawal of the Japanese forces and still expecting a counter attack, the Americans and Filipino soldiers waited several days before their final assault of Baguio that led to its total liberation on 27 April 1945. Somehow, General Yamashita and his 10,000 strong army made good in their retreat from the city. It was about five (5) months later that the Japanese lost the war in the Philippines.

The Americans and Filipino soldiers pursued General Yamashita and they captured him on 02 September 1945 in Kiangan, Ifugao. He was escorted by Colonel F.M. Smith back to Baguio and on 03 September 1945 he signed the unconditional surrender of the Japanese army. The honorable surrender took place at the residence of the US Ambassador at Camp John Hay. Upon their arrival at Camp John Hay, Major General Tomiyuki Yamashita and Vice Admiral Denhichi Okoochi handed over their samurai swords to Colonel George H. Bishop, G-2 of the armed forces in the western pacific (AFWESPAC). In equally fine fashion, Colonel F.M. Smith, the commander of Camp John Hay honored the rank of his prisoner by billeting ten (10) of the ranking officers at the High Commissioner’s Residence.

When the surrender ceremonies had ended, the Japanese were escorted to the New Bilibid Prison as prisoners of war (POW). Baguio experienced a memorable event in its history when it was made the site of the final surrender of the Japanese Forces. Allied dignitaries, soldiers and Baguio residents held a Cañao to celebrate the liberation of the city. A liberation festival was even held in 27 April 1946 to show the gratitude that every peace loving citizen of this wonderful city feels. 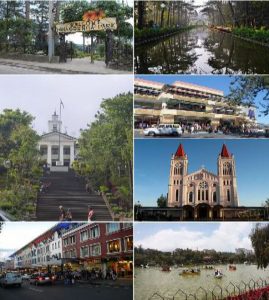 6 p.m. on Monday, 16 July 1990, a killer earthquake unexpectedly hit and extensively devastated the City of Baguio. The powerful temblor measured 7.7 in the open-ended Richter scale and lasted for 45 seconds.

It was said to be the most destructive earthquake on record within the Cordillera region.
There were numerous aftershocks that followed and the strongest, which occurred at 3:15 a.m. of 18 July 1990, lasted for eight (8) seconds and measured 5.3 on the Ritcher Scale.

2009
Years after the killer earthquake, Baguio City has recovered and is standing firm and proud for its restored heritage.

Dawn ushers in a new day a few months before a new century begins of Baguio City. The hundred years that followed after it become the second chartered city of the country saw Baguio gain renown as “The Summer Capital of the Philippines”. It also evolved into a city of faith, a haven for arts and culture, the seat of quality learning and the premier economic center of the north as well as the gateway to the Cordillera Highlands.

Until today, Baguio City as the Summer Capital of the Philippines is the most frequent destination in Northern Luzon by local and foreign tourists alike. The city is the first in the country to be named by the United Nations Educational, Scientific and Cultural Organization (UNESCO) as one of the 64 worldwide in its Creative Cities Network. The city made it to the list under the Crafts and Folk Art category along with other 16 cities like Barcelos in Portugal, Cairo in Egypt, Tunis in Tunisia, Madaba in Jordan and Carrara in Italy.

1. End poverty in all its forms everywhere

3. Ensure healthy lives and promote well-being for all at all ages

4. Ensure inclusive and quality education for all and promote lifelong learning

5. Achieve gender equality and empower all women and girls

7. Ensure access to affordable, reliable, sustainable and modern energy for all

8. Promote inclusive and sustainable economic growth, employment and decent work for all

13. Take urgent action to combat climate change and its impacts